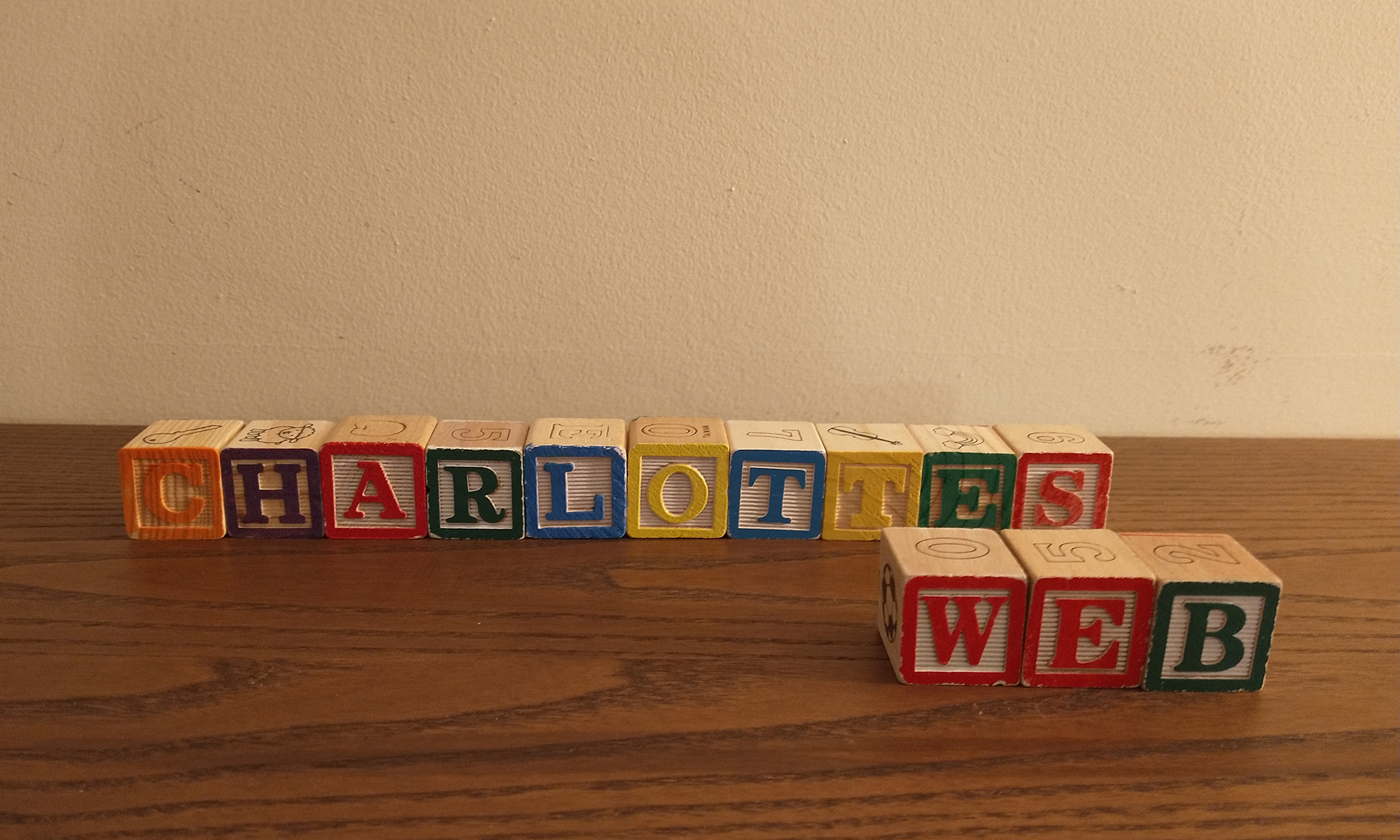 Let’s discuss a terrific, radiant, humble book. Some book, really. Charlotte’s Web by E.B. White. This book was first published in 1952, and tells the improbable yet heartwarming tale of a friendship between a pig and a spider. It’s also how most school kids learn about death, unless they see The Lion King first.

Pre-reading Activity: Writing About Friends
For anyone who can write letters

This activity is meant to help students think about the nature of friendship and consider the words we use to describe a true friend. Give the following instructions to each student:

E.B. White was a famous writer who chose his words carefully so that he could express exactly what he needed to. His character Charlotte the spider was no different. Her words were carefully chosen to describe her friend Wilbur and to persuade the humans who met him to value him as much as she did.

Choose a friend or someone that you admire to think about. In the same way that Charlotte chose words to describe Wilbur, select a word that describes that person’s best characteristics. On one side of a piece of thick paper or cardstock, write the name of the person, the descriptive word and its definition. More advanced students should also look up and write down the word’s etymology.

Turn the paper over. Draw a spider’s web using a pencil, pen, or marker. Using glue, write the word they have chosen on top of the web. Sprinkle glitter on the glue and allow to dry, then shake off the excess glitter into a trash can. A squeezable tube of glitter glue is a less messy alternative.

Pictures can be hung up in the classroom windows for the duration of the Charlotte’s Web unit.

Give students this writing prompt after reading Chapter 1 of Charlotte’s Web.

Fern Arable stops her father from killing a newborn pig because she sees it as an injustice. Injustice is a Latin word that means “wrongfully and unreasonably oppressive.” Research a current or historic example of injustice, then write an essay in which you describe the injustice. Explain how you would correct that injustice if it were within your power to do so.

In Chapter 3, entitled “Escape,” Wilbur is encouraged by the other barnyard animals to escape from his pen. After he gets out, the Goose asks him “how do you like it?” and Wilbur replies. “I like it. That is, I guess I like it.” Peer pressure led Wilbur to do something that he wasn’t exactly sure about. Like the way Farmer Zuckerman put a fence around the pigpen, parents make rules for their children. Those children (sometimes with the encouragement of their friends) will want to wander outside those boundaries. Give the following writing prompt to your students:

Write an essay explaining when adults should place limits on what children can do, and when they should allow children to do something independently, even if it means things might not go well. Give examples of times when children should rely on adults’ experience and times when adults should not help children so that they can learn on their own and learn to be confident and resilient. Give examples of times when peer pressure can be good or bad, and explain some ways to deal with a situation where your friends are encouraging you to go outside the boundaries your parents have set.

Put students into pairs. Have each group choose an example of a predator and its prey. They might choose something like spiders and flies, lions and gazelles, cats and rats, or humans and deer. One student will choose to study the predator and the other will study the prey. Each student will produce a report that includes the following:

Chapter 6 Activity: How should we treat animals?

In Chapter 8, Fern tells her mother all about what the barnyard animals say. Her mother seems very concerned. She seems to think it’s not good for Fern to say animals have names and can talk to one another. In reality, it’s very healthy for children to have imaginary friends, and Mr. Arable seems to think it’s just fine for Fern to believe she can hear the animals talk. Divide students into small groups and have them discuss the following questions:

Did you have an imaginary friend? Describe this friend. How old were you? How much do you remember about what you played? Why do you think you stopped playing with your imaginary friend? What kind of playing took over instead?

Students can build on this discussion by creating a presentation in which they discuss their early childhood experiences, draw pictures of their old imaginary friends, and describe the adventures they had together.

In Chapter 9 Charlotte mentions the Queensboro Bridge, which is a famous bridge in New York City. E.B. White was from New York and would have used this bride a lot. Its lattice pattern bears a resemblance to a spider’s web. Engineers have often used nature for inspiration to solve engineering problems, such as when they used spider web patterns to create glass that birds could see better, reducing the number of bird strikes on skyscrapers. Scientists are currently studying spider silk to try to come up with a way to make synthetic silk. Give the following prompt to students, then have them do research and write an essay:

Imagine that you are a scientist in the research division of Spider Silk, Incorporated. You have figured out how to make artificial spider silk. What are three applications of this new technology? Brainstorm and research some ideas, then write an essay describing three possible inventions. Describe what each invention is, who would be likely to buy it, and how it would be used.

Give each student some coins. Encourage students to use the coins to help them with calculations. Equations can be visualized by arranging coins on a table and then moving them around. Then present the following problems:

1. Mr. Arable gave Fern two quarters and two dimes. He gave Avery five dimes and four nickels. How much did each child get? Was it the same amount? Answer: Yes. They received 70 cents each.

2. Ferris wheel rides cost 10 cents each. Fern’s mother gave her 40 cents. How many times can Fern and Henry Fussy ride on the Ferris Wheel together? Answer: Twice.

End of Reading Activity: Charlotte’s Crossword Puzzle
For Third grade and up

Materials needed: One crossword printout per student and a pencil

Print out the following crossword puzzle and have students complete it on their own or with help. There are two versions — one with American spelling and the other with British/International spelling. This crossword should be given after reading the book and can work as a vocabulary and spelling quiz. Younger students may need to see the list of words when completing the puzzle. More advanced students should be able to recall the words from memory.